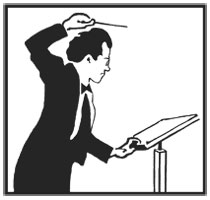 GMMF President Dan Weiss addresses the orchestra during a rehearsal.

The Green Mountain Mahler Festival was founded in 2002 by Daniel Weiss, an avocational bassist, and physician and scientist at the University of Vermont and Fletcher Allen Health Care. The GMMF is modeled after the Northwest Mahler Festival, which was founded by Dr. Weiss in 1995 and has become a fixture of the Seattle music scene.

The GMMF's mission is to provide the opportunity for local area musicians, including serious avocational musicians, professionals, and talented students, to experience the large-scale Romantic works not generally accessible to smaller local orchestras, and to bring this music to the public.

Since 2002, we have held readings a few times per year. Readings are open to all qualified musicians, and draw as many as a hundred participants from throughout Vermont and the region. While family and friends are welcome to come and listen, the readings are not performances. Rather, each session is spent exploring a given piece of music for the musical growth and enjoyment of the participants. Readings to date have included the symphonies of Gustav Mahler as well as major works by Richard Strauss and Anton Bruckner. In addition to allowing local area musicians to experience these works, the reading sessions provide a unique opportunity for area conductors. Participating conductors to date include Daniel Bruce, Andrew Massey, Michael Hopkins, and Troy Peters. The readings have also attracted visiting conductors from outside the local area, including Geoffrey Simon and Eric Hanson.

The Green Mountain Mahler Festival is free to all musicians and no fees are required for participation. We are a 501(c)(3) non-profit organization dependent on donations to help cover expenses, and hope that you will support GMMF in its continuing mission.

Experience Mahler. It's happening in Vermont!